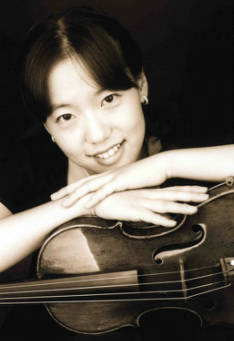 Korean violinist/violist Yoon-Kyung Shin made her solo debut with the Daegu Philharmonic Orchestra at the age of 6 in South Korea. At age 9, she followed her parents to the United States and continued her studies with Jascha Brodsky at the Temple University Prep School. She was awarded the “Gifted Young Musician” scholarship and soloed with the school’s Baroque Ensemble Orchestra. When she returned home, Ms. Shin resumed her musical training at the Yewon School, Seoul Arts High School and received her Bachelor of Music Degree at the Seoul National University where she graduated with honors. She decided to pursue her Master of Music Degree in the States at the New England Conservatory where she graduated with academic honors.

Her musical talent has been highly recognized by numerous violin competitions such as the Segae Newspaper Competition, the Korea Germany Brahms Association Concours, and the Seoul Philharmonic Orchestra Competition. Ms. Shin has appeared as a soloist with orchestras such as the Buchoen Philharmonic Orchestra, Sofia State Symphony Orchestra and the Seoul National University Ensemble Modern. She is expected to perform with the StonyBrook University Orchestra as the 2010 StonyBrook University Concerto Competition Winner and appear as soloist at the Trinity Church ‘Concerts at One’ Recital Series.

As a chamber musician she has performed as part of the “Sunday Morning Chamber Concert” at the Schleswig-Holstein Music Festival with Ivan Fischer as host and with the TIMF Ensemble at the Ensemble TIMF “Korean Composers in the U.S” concert. She has collaborated with world-renowned artists such as Colin Carr, Soovin Kim, Daniel Panner, Arthur Haas, and worked with Donald Weilerstein, Pamela Frank, Joel Smirnoff, and Ani Kavafian in masterclasses.

As an orchestral musician, she has toured in Germany and Brazil with the Schleswig-Holstein Festival Orchestra and in Japan with the New York Asian Symphony Orchestra. She has been concertmaster of the New England Conservatory Philharmonia Orchestra and the New England Conservatory Chamber Orchestra where she performed various concertmaster solos such as Richard Strauss’ “Don Quixote”. She has also led and conducted the StonyBrook University Orchestra as a Teaching Assistant. She is presently an active member of the New York Asian Symphony Orchestra and the Carnegie Ensemble in New York City as well as the North Shore Pro Musica Chamber Players of Long Island, New York.

Ms. Shin has been an Erwin and Freddie Staller Scholarship recipient at StonyBrook University where she studies with Philip Setzer, Soovin Kim, Daniel Panner and the Emerson String Quartet in pursuit of Doctor of Musical Arts Degree in both violin and viola.