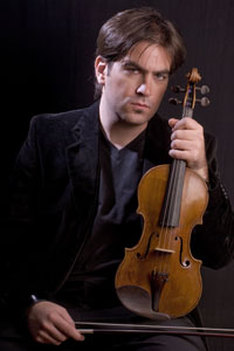 Hailed by La Nacion for his “beautiful sound and exquisite musicality”, Argentinean violinist Sami Merdinian has received worldwide recognition for his outstanding performances as a soloist and chamber musician. Sami has recently appeared with the Montevideo Philharmonic, the Argentinean National Symphony, The Charlemagne Orchestre, Symphony Pro Musica, The Gagneung Philharmonic in South Korea, Philharmonia of the Nations at the Concertgebouw in Amsterdam and Buenos Aires Philharmonic at Teatro Colon.

As the violinist of Sima Trio, in its inaugural season, engagements include performances at the Bulgari residence, Little Rock Chamber Music Society, Brooklyn library, Saugerties ProMusica series, and Fort Bragg Arts Center, Ridotto Concert Series and Zimmerli Museum at Rutgers University. As one of the violinists of Sybarite5, Mr. Merdinian will be part of the Aspen Music Festival Alumni Ensemble, and just announced 2010 residencies at the cell theatre in New York and in Sarasota, Florida.

Sybarite5 will also be performing at the Library of Congress the esteemed Whittall Stradivarius collection later in the Fall. Member of Sejong Soloist since 2008, Sami has performed throughout the United States and Asia, including a US West Coast Tour with Gil Shaham, Norfolk Music Festival, Great Mountains Music Festival, at Seoul Arts Center, Zenkel Hall at Carnegie, and has recorded for Universal Records and Canary Classics.

Sami’s most recent recitals include concerts for Mozarteum Argentino, Festival of the Hamptons, WMP Concert Hall, as well as a recital with pianist Enrico Pace at the 2010 Al Bustan Festival in Lebanon.

Mr. Merdinian has been prize winner in several international competitions including Gold Medal in the XII International Young Solo Instrumentalists Competition in Argentina and the New Talent Competition in Slovakia organized by the European Radio. He has also received the Rising Star Award by Tiffany & Co., was named Outstanding Artist of the Year by the Argentinean Press, and has been featured in WQXR in New York, “Spiegenzall” live from the Concertgebouw, Argentinean Classical National Station, and London’s BBC.

While at The Juilliard School and Yale University, Mr. Merdinian was a pupil of Dorothy Delay, Naoko Tanaka and Peter Oundjian, and has participated in masterclasses for artists such as Itzahk Perlman, Ruggiero Ricci, Emmanuel Ax, Pamela Frank and members of the Tokyo, Cleveland and Guarnieri String Quartets.