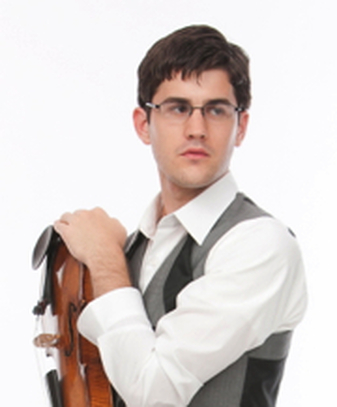 A “born and raised” violist growing up around the world, Nathan Schram has established himself as a chamber musician devoted to bringing the music he loves to communities around the world. A prizewinner of the 2008 Primrose International Viola Competition and first prize winner of ASTA’s 2009 National Solo Competition, Nathan has gone on to perform in the most prestigious halls of the United States and Europe, including the Kennedy Center, Lincoln Center, Carnegie Hall, Auditorio Nacional of Madrid and the Gran Teatre de Liceu of Barcelona. In addition, Nathan is regularly featured on National Public Radio’s Weekend Edition with journalist Jeff Lunden.

As a devoted chamber musician, Nathan has recently joined the Bryant Park Quartet, a string quartet equally passionate about chamber music as it is to educational outreach advocating great music in the community. As an ensemble of the Ariel Artists’ roster, the BPQ frequents stages in America from coast to coast.

Nathan is also a Fellow of The Academy – A program of Carnegie Hall, the Juilliard School and the Weill Institute of Music in partnership with the New York City Department of Education. As an Academy Fellow, Nathan participates in frequent chamber music performances throughout the city’s leading chamber music venues such as Carnegie Hall, Le Poisson Rouge, Lincoln Center, and WQXR’s Greene Space. In addition to performing chamber music Nathan is partnered with Elementary School PS75k in Bushwick, Brooklyn as the resident teaching artist. His experience as a teaching artist and Academy fellow is currently being documented by radio journalist Jeff Lunden as a 2-year, multipart series for NPR’s Weekend Edition.