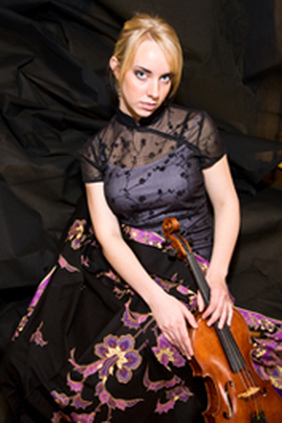 Violist, MOLLY CARR, praised for her “ravishing sound” (the STRAD) and “passionate talent and beautiful poise… all in one package” (AVS), was a top Prize Winner in the 2008 Primrose International Viola Competition.  As winner of the 2010 Juilliard Viola Concerto Competition, Miss Carr made her New York solo debut with the Juilliard Orchestra under Xian Zhang, performing the Bartok Viola Concerto in Lincoln Center’s Alice Tully Hall in April 2010.  She has won several other major honors, including first prize in the National Solo Competition of the American String Teacher’s Association, an instrument scholarship from the Virtu Foundation, a scholarship endowment from the Davidson Institute for Talent Development, top honors in the National Foundation for Advancement in the Arts’ prestigious Arts Recognition and Talent Search Program, and full scholarships for study at the Manhattan School of Music and the Juilliard School.

As a recitalist, Miss Carr recently performed at the Jerusalem Music Centre in Israel, at New York City's Weill Hall, Neue Galerie, and W.M.P. Concert Hall,in Juilliard’s Paul and Morse Halls, on the Firefly Concert Series in Charlottesville, Virginia, and on the Young Musician’s Forum series in New York’s Hudson Valley.  Her performances have been broadcast on National Public Radio’s From The Top as well as on Hungarian National Television.  She has also been a soloist with the Reno Philharmonic, the Reno Chamber Orchestra, and the Carson City Symphony.

Miss Carr performed at Carnegie Hall as part of the New York String Orchestra Seminar, and at the Kennedy Center in Washington, D.C., with the former Washington Chamber Symphony’s Viva Vivaldi! All Girl Orchestra.  She also appeared on PBS’s Live From Lincoln Center and CBS’s Kennedy Center Honors Program, with Itzhak Perlman, Pinchas Zukerman and fellow students of the Perlman Music Program.

A native of Reno, Nevada, Miss Carr holds a B.M. and M.M. from the Juilliard School, where she studied with Heidi Castleman and Steven Tenenbom.  She serves as Teaching Assistant to Ms. Castleman in both the Juilliard undergraduate and precollege programs.  Her former teachers include Pinchas Zukerman, Patinka Kopec, and Virginia Blakeman Lenz.