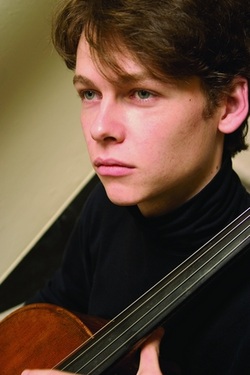 Mihai began his training as a cellist at the age of seven at the Music High School in his native city of Cluj, Romania. At the age of 18 he moved to the United States where he has earned his Master's and Artist Diploma Degrees under the guidance of renowned cellist and pedagogue Prof. Aldo Parisot at the Yale School of Music. While still in Romania Mihai won the first prize of numerous competitions, including the J.F. Dotzauer International Cello Comeptition in Dresden, Germany. While at Yale he won the First Prize and the award for the best performance of a commissioned work by Jeffrey Miller, in the 2005 Irving M. Klein International String Competition, the First Prize and the Audience Choice Award at the 2006 "Dr. Luis Sigall" International Competition in Vina del Mar, Chile, and he received the 2006 Charlotte White's Salon de Virtuosi Fellowship Grant.

Mihai has performed as a soloist with orchestras such as the Louisville Orchestra, Santa Cruz Symphony (U.S.A.), Symphony Orchestra of Chile, Xalapa Symphony (Mexico), Daejeon Philharmonic Orchestra (South Korea), the Hermitage State Orchestra of St. Petersburg (Russia), and the Stuttgart Youth Orchestra (Germany). In his homeland, he has soloed extensively with the major orchestras such as, the Transilvania Philharmonic Orchestra, and the National Radio Orchestra. He has also appeared in recital performances in Austria, Hungary, Germany, Spain, Holland, South Korea, Japan, Chile, the United States and Canada. He has performed in several festivals, including the Banff Music Festival, Great Mountains Music Festival, the San Miguel de Allende Music Festival, and the Laguna Beach Chamber Music Festival, where he worked with the renowned bass player Edgar Meyer. Mihai played a Weill Hall debut recital and a Zankel Hall debut performing Tchaikovsky's Rococo Variations in early 2008. Mihai served as interim principal cellist with the New Haven Symphony Orchestra for the 2008-2009 season.