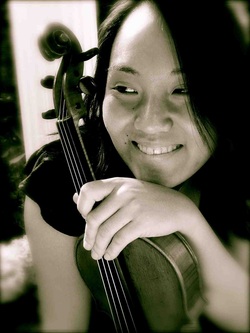 Violinist Grace Kang is currently studying for her Bachelor of Music degree at the Juilliard School with Stephen Clapp. Born of missionary parents in South Korea, Grace, from the age of 3, followed her parents to live in countries in Southeast Asia, including Saipan, Singapore, and China. Grace began her violin studies in England at the age of 8. Fifteen minute lessons per week progressed into hour long lessons, but she was not able to continue because of the constant change in environments. Finally, at the age of 13, Grace decided to further pursue her musical studies away from home.

Upon arriving in America, Grace did not hesitate in following her passion. She was accepted into the Manhattan School of Music Pre-College division and studied with Byung-Kook Kwak. She served as concertmaster of the MSM Pre-College Philharmonic Orchestra from 2004-2006. In 2003, she won first prize in the New York Music Competition and played at the Weill Recital Hall. She was also the recipient of the Dianne Danese Flagello Schlarship Award, Hansoree Scholarship Award, Jerome L. Greene Fellowship, and the Michael and Ethel Cohen Scholarship. She is the winner of the 2006-07 Samuel Gardner Prize and held a recital in honor of the award, performing some of Gardner’s works. Grace has studied chamber music with Toby Appel, Jonathan Feldman, Laray Levy, Seymour Lipkin, Joel Smirnoff, and Samuel Rhodes. In 2009, Grace was accepted into the Early Music Workshop at the Juilliard School directed by William Christie and members of the Les Arts Florissants. Grace is currently a member of the Carnegie Ensemble which made its debut in 2008 in Merkin Hall.

Grace is also a strong advocate of community engagement. She directed a North Korea awareness and fundraising concert, “For my Other Half,” performed by Juilliard students in 2009 at the Juilliard School, in which the proceeds went to aid feeding children in orphanages and schools in North Korea. She is also a member of Young Park and Friends, EnoB (Innovative Bridge), and the Gluck Community Service Fellowship, playing in diverse medical facilities, homes, and libraries.

Her deepest joy is knowing and experiencing music, which not only presents beauty and emotions to the audience, but has the ability to draw out the simplicity of the human heart so silently hidden.