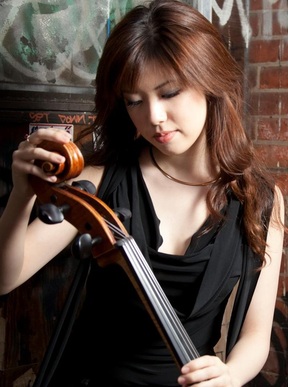 Eru Matsumoto, a 20-year-old Japanese cellist, has been charming audiences around the world since the age of 6. Eru is already an experienced soloist, traveling for performances in Vienna, Tokyo, Singapore, Aspen, Los Angeles, and New York City. She made her live on-air debut at age 15, playing the Tchaikovsky Pezzo Capriccioso from the Albany Public Radio Station; at age 17, her rendition of the sonata for solo cello by George Crumb was played on 1320 Warl Talk Radio. She has also performed in a Japanese television commercial, been filmed for a HBO project at the age of 12, and appeared on television with a famous Japanese pop star.

As an avid chamber musician and principal cellist with several orchestras, including the Juilliard School orchestra, Eru has performed in such celebrated venues as Walt Disney Concert Hall, Avery Fisher Hall, Lincoln Center and Carnegie Hall. When she was 14 years old, she performed the U.S. premier of Eric Tanguy's sonata for violin and cello, which the illustrious composer himself attended from France. She has been a featured performer in many concerts at the Aspen Music Festival since she was 13 years old, and she was recently well-received as part of the “Juilliard in Aiken” Festival in South Carolina, giving performances and outreach classes every day to standing ovations.

By age 16, Eru had been accepted to the Julliard School under the tutelage of the late David Soyer, the legendary cellist from the Guarneri string quartet. She is continuing her studies at Juilliard with Bonnie Hampton. Before coming to the Juilliard School, she studied with the former LA Philharmonic principal cellist, Andrew Shulman and the University of Cincinnati College-Conservatory of Music professor, Yehuda Hanani, and she received numerous awards and honors while their student. She has also taken many master classes with world-renowned teachers including Arto Noras.

She is currently involved in multiple recording projects, which are already planning CD release concert tours.