Not too big, not too small (Solisti Ensemble is formerly known as Carnegie ensemble) 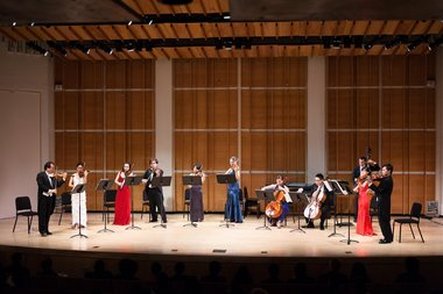 Not too big, not too small: 11-piece lineup allows Carnegie Ensemble to handle a wide array of material.

For the Carnegie Ensemble, 11 is the magic number.


Larger than a string quartet or quintet but smaller than a chamber orchestra, the group of string musicians has garnered a following in Ocean Grove, where it will be back by popular demand this Thursday after last summer’s successful performance.


"The whole idea is that this size ensemble will create the fullness of an orchestra and have the precision of a string quartet," says Carnegie Ensemble founder and artistic director Byung-Kook Kwak.


With no conductor, he adds, "Everyone has to breathe together."


The concert, held in the Great Auditorium, will begin with the first movement from Piotr Illyich Tchaikovsky’s "Serenade for Strings," which will provide a regal opening and peppy charm. But instead of moving on to the work’s next section, the ensemble will play a series of shorter works by composers who are mostly from the 19th century.


"We can do any music written for quartet, octet, septet. … Except for the big symphonic works, we can basically do anything," Kwak says.


The ensemble’s repertoire includes classics such as the "Serenade" as well as arrangements of tango, jazz and classic songs such as "Moon River" and the "Pink Panther" theme. Kwak likes to mix up short pieces and single movements — much like the New Jersey Symphony Orchestra does with its "Best of" concerts.


"This way I can put eight to 10 different pieces in one program," he says.


And, he adds, "Nobody falls asleep."


"Listening to a whole Mahler symphony is great for trained musicians," he says. "But I think the majority (of audiences) find it too difficult."


Kwak founded the Carnegie Ensemble in 2008. It is not officially associated with Carnegie Hall; Kwak chose the name to evoke the prestige and the philanthropic legacy that is associated with the historic hall. The ensemble’s excess profits have consistently gone toward charitable causes such as aid for the homeless and the hungry.


"We are not only existing to refine classical music," Kwak says.


Kwak’s inspiration to form the group came largely from I Musici, a popular Italian, baroque-focused ensemble best known for its recordings of Antonio Vivaldi’s "The Four Seasons."


The baroque period will be represented on Thursday by Johan Halvorsen’s reworking of Handel’s G minor harpsichord suite, the Passacaglia for violin and viola. Kwak will play viola for the vigorous duo alongside his daughter, Christine Kwak, on violin.


For Jules Massenet’s "Méditation," a lushly melodic excerpt from the opera "Thaïs," Kwak will return to his primary instrument, the violin. The work is often performed with varied instrumental groups. For the Carnegie Ensemble concert, Ocean Grove’s resident organist Gordon Turk will join Kwak to give the work additional dimension and richness. The Great Auditorium is known for its world-class instrument.


"I always want to take advantage of that organ," Kwak says.


Oh and Turk both will join the ensemble for César Franck’s "Panis Angelicus," a setting of the sacred text that Kwak says fits particularly well with Ocean Grove’s spiritual, open-air venue.


"That setting is so special," he says. "It has an evening breeze kind of mood."