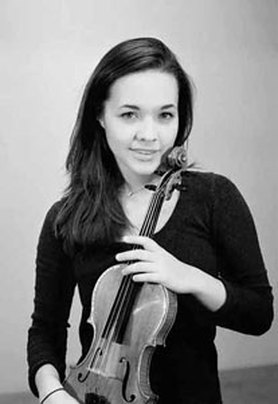 Violinist Emily Daggett Smith is rapidly emerging as one of the most compelling artists of her generation.  Ms. Smith won first place in the Juilliard concerto competition and made her New York concerto debut in Alice Tully Hall, playing the Beethoven Violin Concerto with the Juilliard Orchestra, under the direction of Emmanuel Villaume.

As an active chamber musician, Ms. Smith has performed in venues around the world with such artists as Andrés Diaz, Claude Frank, Joseph Kalichstein, Orion Weiss and Eugenia Zukerman. Ms. Smith has performed at various festivals including the Seattle Chamber Music Society, Ravinia's Steans Institute, Banff International Masterclasses, Kneisel Hall, and the New York String Orchestra Seminar. All of her performances from the Seattle Chamber Music Society have been broadcast live on Classical King FM.  She has also appeared on PBS's national broadcast, Live from Lincoln Center, as well as twice on NPR's From the Top.  In addition to her numerous performances as a violinist, Ms. Smith also performs regularly as a violist.  This season, she will perform Mozart's Sinfonia Concertante with violinist Stefan Jackiw and the New York Classical Players, conducted by Dongmin Kim.

Ms. Smith is the founding first violinist of the Tessera Quartet, an emerging New York-based ensemble.  The quartet recently recorded a world-premiere album of Harold Brown's complete works for String Quartet on Albany Records to commemorate the composer's centennial.  Recent highlights include collaborations with Orli Shaham at (le) Poisson Rouge and recital appearances with renowned pianists Claude Frank and Hamish Milne, as well as multiple performances of Lowell Liebermanns Piano Quintet with the composer at the piano.  The Quartet made its New York debut on the New School (Schneider) Concerts series, and has performed on many series, including Brooklyn Friends of Chamber Music, the Tri-I Noon Recital Series at Rockefeller University, Ars Vitalis at Kean University, Chamber Music Live at Queens College, Music Mondays, and the Rhinebeck Chamber Music Society. Ms. Smith is also a founding member of the West End Trio with pianist Michael Brown and cellist Matthew Zalkind, with whom she performed Ravel's Piano Trio in Alice Tully Hall in April, 2010.

Ms. Smith has performed as Concertmaster of the Juilliard Orchestra under the direction of James DePreist, Nicholas McGegan, Jeffrey Milarsky, Leonard Slatkin, and Michael Tilson-Thomas. She has traveled with the orchestra to Beijing and Shanghai, as well as across the United States, performing in such venues as Avery Fisher Hall, Carnegie Hall, Disney Hall in Los Angeles, The National Centre for the Performing Arts in Beijing, and the Shanghai Grand Theatre.

Ms. Smith regularly performs throughout New York City with various ensembles.  She appeared multiple times at Zankel Hall with Ensemble ACJW, collaborating with such artists as Sir Simon Rattle, Christian Tetzlaff, Barbara Hannigan, and David Robertson.  She also frequently performs with the Grammy-nominated Metropolis Ensemble, most recently in an innovative Brownstone concert, in which ten musicians performed in different areas of a three-story Brownstone in a "site-specific electro-acoustic composition/installation" (metropolisensemble.org).  She is also a member of the New York Classical Players; highlights include performances with cellist Mark Kosower, soprano Jung-Nan Yoon and this season violist Kim Kashkashian.

Ms. Smith is dedicated to teaching and outreach.  She has a small private studio in New York, and has taught violin lessons at Greenwood Music Camp in the Junior Division, as well as being an assistant chamber music coach at Kneisel Hall Young Musicians Program.  She has participated in the Gluck Community Service Fellowship at the Juilliard School, where she performed at many hospitals and youth centers throughout New York.  She has also performed as a member of the Outreach Quartet at Kneisel Hall.

Born in 1987, Ms. Smith grew up in the Boston area. She won various competitions in New England and performed violin concerti with the Brockton, Newton, and Waltham symphonies. In 2005, her piano trio won Gold Medal at the Fischoff National Chamber Music Competition in the junior division. She has appeared on PBS's national broadcast, Live from Lincoln Center, as well as twice on NPR's From the Top. For nine summers she attended Greenwood Music Camp in Cummington, Massachusetts, which fostered her deep love of chamber music. In honor of Greenwood's 75th anniversary, Ms. Smith performed Saint-Saens Introduction and Rondo Capriccioso with the Greenwood orchestra at the Hatch Shell in Boston.

In 2009 Ms. Smith received her Bachelor and Master of Music degrees from The Juilliard School. She is a recipient of the Ryoichi Sasakawa Young Leaders Fellowship Fund Scholarship, and as a result participated in a chamber music tour of Japan with three fellow students, as well as performing Schoenberg's Verklerte Nacht at the Musée de l'Armée in Paris in a special collaboration with the Paris Conservatoire and the University of Music and Performing Arts of Vienna.  Her teachers have included Ronald Copes, Nick Eanet, Joel Smirnoff, Laurie Smukler, Masuko Ushioda, and Donald Weilerstein.