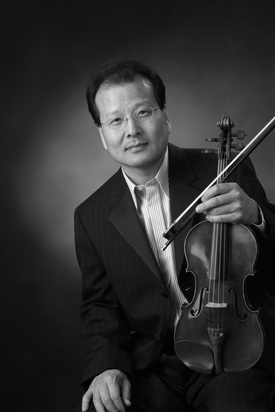 Internationally acclaimed as one of the finest violinists of this generation, Byung-Kook Kwak enjoys a versatile career as a soloist, chamber musician, and educator. From coast to coast, critics have hailed him as a premier violinist whose musical gifts and technical wizardry are powerful and sensitive. Mr. Kwak has received critical acclaim for his performances with orchestras such as Baltimore Symphony, Atlanta Symphony, American Symphony, Kansas Philharmonic, Edmonton Symphony, Montreal Symphony, New Philharmonic of New Jersey, Westchester Symphony, Houston Symphony, North Carolina Symphony, Chicago Civic Orchestra, Long Beach Symphony, Queens Symphony, Little Orchestra Society, as well as Los Angeles Chamber Symphony. In Europe, he has appeared as a soloist with Stuttgart Chamber Orchestra, Cologne Radio Orchestra, Bamberger Symphony, Rotterdam Philharmonic, and French National Orchestra. He has been featured soloist with New York Virtuosi on its European tour in 14 major cities, including Ton-Halle in Cologne, Civic Hall in Hanover, Royal Albert Hall in London, and most of the major concert halls in Germany, Holland, and France. In Scandinavia, he has appeared with Helsinki Philharmonic, Gothemberg Symphony, and Oslo Philharmonic.

Active as a chamber musician, Mr. Kwak participates in chamber music in diversity, playing from baroque ensemble to Schonberg and Penderecski, and is a member of world renowned Sea Cliff Chamber Players. He is also very active as a concertmaster and appears in that capacity with virtually every major symphony orchestra around the Metropolitan New York area.Mr. Kwak has occupied himself with a busy conducting schedule as well. He has been the conductor of the Summit Music Festival Orchestra for the past five years, has conducted the Queens Symphony Orchestra, and the Manhattan School of Music Summer Festival Orchestra in the summer of 1999. During the season of 1999-2000, he has been engaged as a guest conductor with the Long Beach Symphony and the Queens Symphony Orchestra, as well as the Orchestra of the Westchester Conservatory of Music, and the Manhattan School of Music Summer Festival Orchestra. He has also been active as a choral conductor for over twenty years. Combining all these with a teaching career, he has been an assistant to the legendary Aaron Rosand at Mannes College of Music for ten years, and he is currently a faculty member at Manhattan School of Music Pre-College, Lehman College, Queens College, Westchester Conservatory of Music, and chairman of strings at Jewish Academy of Fine Arts.

Born in Seoul, Korea, Mr. Kwak was hailed as a child prodigy who made his orchestral debut at the age of seven with Seoul Philharmonic. He was awarded first prizes in most prestigious competitions in Seoul, including 5.16 president’s award and Dong-A National competition. Continuing his studies in the U.S., he became one of the youngest violinists ever to be accepted to study with Jascha Heifetz at age twelve. Having earned his Bachelor and Master of Music degree from the Juilliard School, he studied with Dorothy DeLay, Ivan Galamian, and chamber music with Felix Galimir and the Juilliard Quartet. Mr. Kwak plays on a J.B. Guadagnini, ex ”Brodsky”, circa 1751.