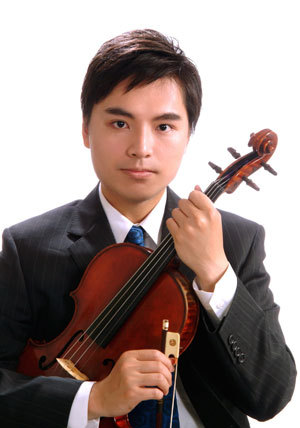 Wei-Yang Andy Lin, recognized as one of the most promising young violists of today, born in Taiwan, is currently a Doctoral Candidate at the Stony Brook University of New York studying with Daniel Panner.  He came to the U.S. in 1997 to attend Idyllwild Arts Academy and studied with Donald McInnes.  He holds his Bachelor and Master's Degree from The Juilliard School.

Mr. Lin is a member of the award winning string quartet The Amphion String Quartet where they have won the Frist Prize in the Piano and Strings Category as well as the Audience Choice Award at the 2010 Plowman Competition.  In the same year, they also won the First Prize in the 2010 Kauder String Quartet Competition.  Mr. Lin has been a member of the LDX String Quartet, appearing on NPR's "From the Top" radio broadcast; Kafka Piano Quintet, appearing at New York's Taiwan Center and New Chinese Television, and currently is with the Asiana Virtuosi, where they frequently perform in Pennsylvania and has appeared on the Columbia Radio Broadcast "Sound of China".  He has served as a principle violist in the Idyllwild Arts Chamber Orchestra, Ureuk Symphony, the Juilliard Orchestra, and the Stony Brook Symphony Orchestra.  He has also served as a principle in the International Sejong Soloists, which he was invited to be an artist at the Great Mountain Music Festival and School in Korea.  He is currently principle violist of the Carnegie Ensemble and the New York Classical Players.  He also had the privilege to perform for the President of the United States, Bill Clinton and the President of Taiwan, Ten-Hui Lee.  He has been invited to play and perform chamber music with Itzhak Perlman at Manhattan Synagogue, Princeton University, Jazz at Lincoln Center, and The Metropolitan Museum.  Artists he has collaborated with include Itzhak Perlman, Ani Kavafian, Ettore Causa, Carter Brey, Chee-Yun Kim, Jian Wang, Colin Carr, members of the Juilliard String Quartet, the Emerson String Quartet, and the Mendelssohn String Quartet.

He has performed throughout the world.  Venues in New York include Avery Fisher Hall, Alice Tully Hall and Peter Jay Sharp Theater in Lincoln Center, Carnegie Hall, Jazz at Lincoln Center, Roger Theater of the Metropolitan Museum, and Merkin Hall.  He has also performed in Kennedy Center in Washington, Whitaker Center in Harrisburg Pennsylvania, Los Angeles Music Center, and Tainan Cultural Center in Taiwan.  He has toured Korea with the International Sejong Soloists and Japan with the New York Asian Symphony Orchestra.  Mr. Lin has also served as a faculty at Musica e Arte in Tolentino, Italy and is currently the artistic director of the New York Formosa Choir.