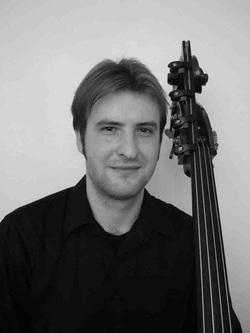 Aleksey Klyushnik enjoys a versatile career as solo, chamber and orchestral musician. As a soloist, Aleksey has given many recital performances around the US. In 2008, Aleksey won The Parness Concerto Competition and performed the Hoffmeister Double Bass Concerto with the Culver City Symphony. Aleksey was granted twice the Award of Merit from Leni FeBland Foundation in Santa Barbara, and won the third prize at Boston's Bay State Concerto Competition in 2010.

As an active chamber musician Aleksey has collaborated with many artists such as André Watts, David Shifrin, Philip Setzer, Ransom Wilson, Paul Neubauer, Altenberg Trio Vienna, Peabody Trio, Robert Van Sice and many others. Aleksey was invited to Chamber Music Northwest for two consecutive summers as Protégé Project fellow. Also Aleksey has been a member of the Maestro Chamber Music Academy in Santa Monica, and has participated in the Yellow Barn Chamber Music Festival.

As an orchestral musician Aleksey has been a participant of the Pacific, Verbier and Lucerne music festivals performing in venues throughout Europe, US and Japan. Aleksey has collaborated with many great conductors, some of which include Pierre Boulez, Valeriy Gergiev, Charles Dutoit, Andrew Davis, Mikhail Pletnev, Esa-Pekka Salonen and Zubin Mehta. In 2008, Aleksey was appointed the principal bass of the Opera Pacific Orchestra in Santa Ana, Orange County, a post he held until November 2008. In addition, Aleksey has performed regularly with several orchestras in Southern California, including the San Diego and Long Beach symphonies.

Aleksey completed all of his studies on full scholarship. He holds both the Bachelor of Music degree and the Artist Diploma from the Colburn Conservatory in Los Angeles, and the Master of Music degree from the Yale School of Music.