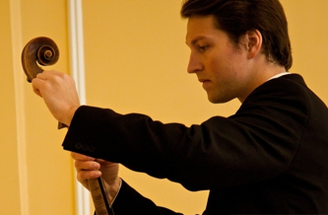 Adrian Daurov, born in St.Petersburg, Russia, studied at the St.Petersburg Conservatory with Anatoly Nikitin. From the early age Adrian appeared as a soloist and chamber musician on the main concert stages of St.Petersburg, Moscow, as well as in Europe and the U.S. He made his debut with the orchestra in 1997 with the St.Petersburg Symphony Orchestra. Adrian was awarded with 1st prizes at the international music competitions in Dobrich, Bulgaria (1996), Peter De Grote, Groningen, The Netherlands (2001) and the LISMA Foundation Competition in NY (2006). In 2004 he toured Germany as a soloist with the St.Petersburg Chamber Orchestra and was appointed the Principal Cellist of the Bayreuth Festival Youth Orchestra under conductor Peter Gulke. He currently studies with David Soyer at Juilliard School of Music. In June 2007, Mr. Daurov was appointed the Principal Cellist of The Chamber Orchestra of New York under conductor Salvatore Di Vittorio. He recently performed the World Premiere of Behzad Ranjbaran's "Fountains Of Fin" at Bargemusic in New York. In June 2008 Adrian was featured in Gala Concert In Celebration Of Russia's Independence Day at Carnegie Hall among the world-famous soprano Elena Obraztsova and tenor Vladimir Galuzin. Adrian recently performed the World Premiere of "The Epistle" for Cello Solo and Choir by a Siberian Composer Yuri Yukechev with The Russian Chamber Chorus Of New York.